Many were victims of Twitter Bitcoin Scam yesterday. Despite the fight against cyber-crime world wide, scamming has been the other of the day in this generation. Many countries are well known to have big numbers of scammers. In fact, some countries like Nigeria are already perceived to be filled with scammers. This perception has become a reality to Nigerian and has caused a lot of harm to them with some of them not even knowing. Cyber-crime is indeed a bad thing. It is not encouraging and should be curtailed.

Few weeks ago, Twitter introduced voice tweet feature and then yesterday, Twitter account belonging to some prominent figures was hacked by a bitcoin scammer who sent out an interesting offer to the public promising to double the amount of bitcoin anyone sends to the address provided. Surprisingly, people believed the trick, perhaps, thought that the message were actually coming from the owner of the accounts and started sending in their bitcoin to the address provided by the scammer.  Below are some of the verified Twitter accounts that was hacked.

The question now is, Who do you blame? Do you blame those that sent in their bitcoin to be doubled for them? Some sent in $1000 worth of bitcoin while others sent more. As you can see from the picture above and below, the message came from the verified twitter account of these prominent world figures. Within minutes, the scammer had already received millions worth of Bitcoin. The question remains, who is to blame? 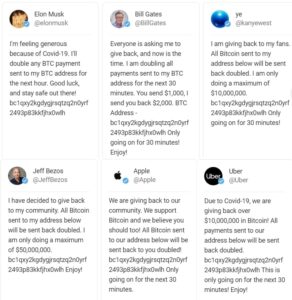 Someone who didn’t receive his money back with minutes as promised by the scammer even lamented that the money he sent was his tuition fee. Many people were begging to refund them their money. I bet that no Nigeria will fall to this kind of scam. I repeat, there is no Nigerian who grew up in Nigeria up til 2 or 3 years ago that will fall to this type of scam. This is because Nigerians are use to this kind of scam. This is what Nigerian sees on a daily basis.

In order words, we pity those who lost their money to the scam. Your money has gone. Just take heart and learn how to stop being greedy. People that fall to the scamming scheme are people that are too greedy. How can you believed someone that ask you to send money for him to double the money for you? In this 2020? Did you not think it twice?

Nonetheless, If Bill Gates or many of them their account was hacked wanted to send some money to pubic, I believe they wouldn’t ask people to send in some money so they could double it.

Take heart and learn your lesson from this one. One thing with making mistakes is that it gives you the ability to learn and never repeat the same mistake again. Please don’t kill yourself over this Twitter bitcoin scam OK. Suicide is not an option.