Huawei Under Display Camera Phone: Could this be Huawei Mate 40?

Huawei has been one giant company I love so much because of how they release good phones with nice design. Since time immemorial, I have always been fan of Samsung mobile phones because of how beautiful their phone designs are coupled with the fact that they come with AMOLED screens but since I discovered Hauwei, I noticed how beautiful their flagship phones and they fact that they also come with AMOLED display too.

Huawei is one company that mean business and that is another thing I like about them. They are always ready and most importantly, always ready to give their customers perhaps, their market what they want. This time around, they are coming with an under-display camera smartphone. Huawei patents online revealed that there is an under display Huawei smartphone in the making.

However, it is important to note that this is not the first time such Huawei under display smartphone patents leaks online, there has been several times when it happened and about 7 different times. But when you look at the renders, you will notice that they all look the same. So we come to a conclusion that those 7 renders online could just be one phone. Though I stand to be corrected. They could be different phones. Just take a look at the picture below. 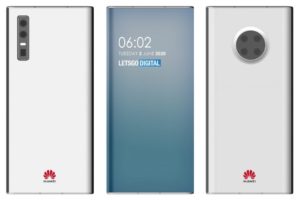 Did you see how beautiful the phone looks? Its so beautiful; so magnificent. If anybody should hate this phone, it has to be because of a deep personal reason(s). Who would hate such a beauty? I don’t even know the word with which I can use to qualify how I feel about this phone. I just love it. Do you love it as much as I do?

Be that as it may, if you take a very close look at that picture above, you will notice that there are two different back camera positions. One is circular while the other one is just straight which prompt us to ask whether this could be the upcoming Huawei Mate 40 series?

As reiterated earlier, it could be one phone with different variants or models. Lets use the upcoming Mate 40 as an example, one could be Huawei Mate 40 Pro while the other with four camera is Huawei Mate 40 Pro Plus considering that Huawei don’t add the phrase ‘Ultra’ to their phones. I stand corrected though. In order words, these could be two different phones entirely.

Another important thing to note from the patent (picture) above is the fact that one of the phones has three camera while the other has four camera conforming to what I had explained earlier, that it might be two different phones or same phones with different models.

Aside that, I mentioned earlier that about 7 of this patents has been revealed online already and that’s true. Since 2019, the company has revealed about 7 patents under screen camera smartphone which was even published by the China National Intellectual Property Office (CNIPA). Remember that non of these phones has been announced by the company yet. But since another patent just emerged online again, we assume it might be the upcoming Huawei Mate 40 Series.

Huawei Mate series are just like Samsung Note series which are always released during the second quarter of the year. Since Mate 40 series launching and release date is near, its normal for its renders and vital information to start leaking online to create awareness and make people thirst and huger for the phone.

How to Install Google Plays Store (GMS) on Huawei Y7p