OnePlus Nord to come with 30W Fast Charger for $330 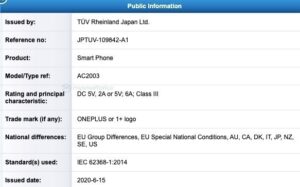 Meanwhile, OnePlus Nord is coming with Snapdragon 765G chipset in a massive 12GB RAM and 128GB of internal storage. This is indeed massive for a price range of about $330. It is also expected to come with a 4,300 mAh and Android 10 for that same price.

OnePlus 8 Pro will have only the Vanilla 8 & Won’t get a Successor this...